The Way to End All Wars 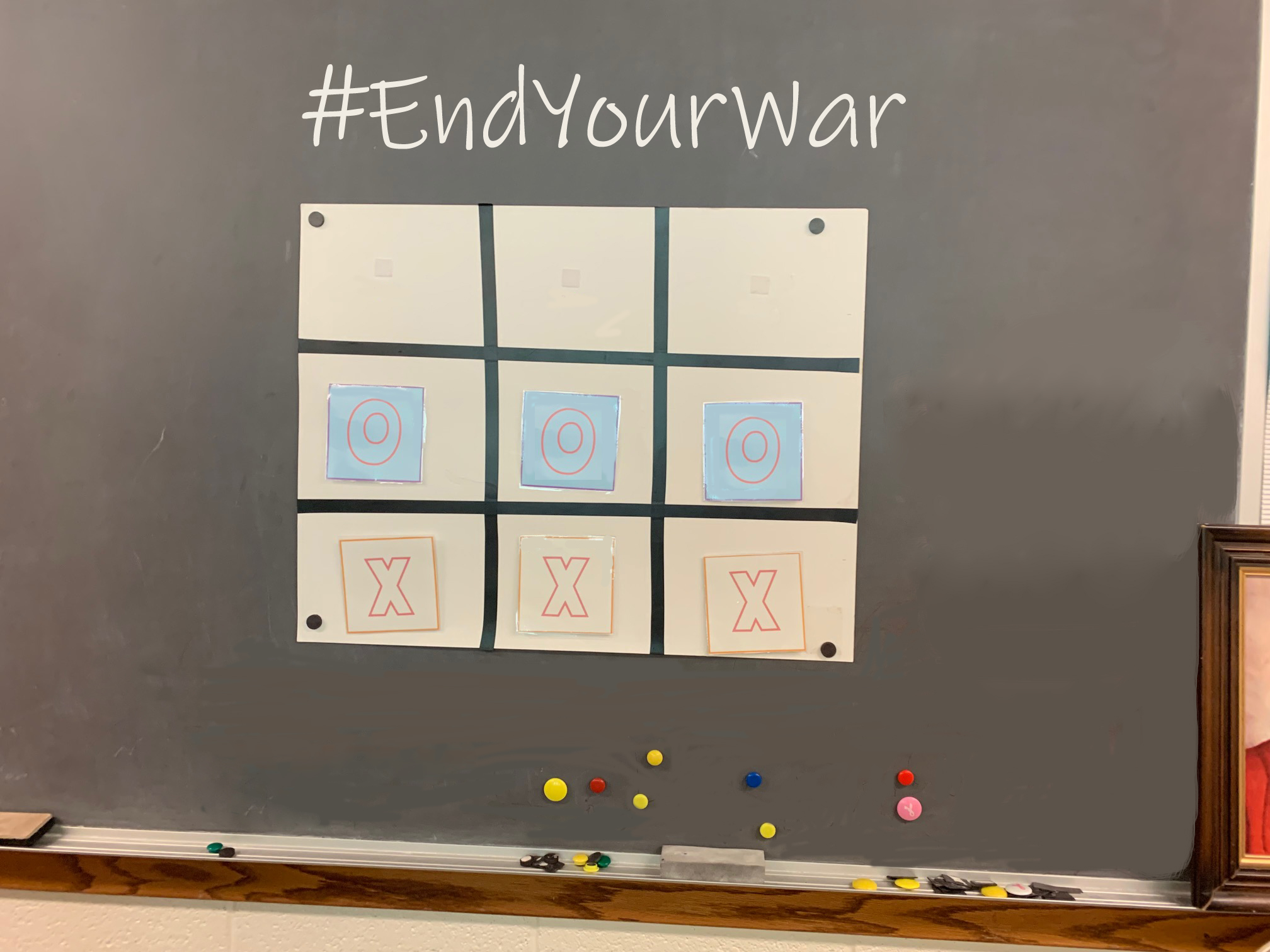 If you’ve ever been the victim of a law suit, dealt with a divorce, or endured bullying, you have likely been through war. The intensity of conflict can threaten our health, emotional well-being, and self-esteem. Social conflict can start young. Even before we know how to read, we likely know what it feels like to lose in social settings. It can feel like the end of the world, even in a life that is just beginning.

Poppy was so confused. The six-year-old had been rewarded for singing out among over a dozen other children in the church class. She got to place an “X” on the Tic Tac Toe game on the blackboard in front of the room. Girls were X’s and Boys were O’s. She placed the X next to the other X, rather than next to the two O’s. Why weren’t the other children applauding her move?

“Hmmm, Poppy didn’t block the boys.” The singing teacher wrinkled her forehead as she did a triple-take toward the board.

“She’s being too nice to the boys,” another teacher said.

I turned my focus from my own 4-year-old class to see Poppy’s eyes squeeze tight and tears start to flow. The child was devastated by the reaction. Was she feeling embarrassed? Did she regret her choice? Her teacher comforted Poppy as the child’s face turned red and her tears surged hotter.

Having had my own emotional embarrassments in childhood, I was worried. My heart had scarred easily, and an accumulation of mini-traumas had caused me to shut off my emotional sensitivity by the time I was a teenager. In an era where emotions were not discussed, much less healed, I had given up even trying to do the right thing by the time I reached eighth grade. I didn’t want this moment to contribute to that kind of outcome for Poppy.

I became the victim of bullying during junior high in 1983. My peers may have thought it was a game, but for me it felt like war. The movie War Games (Badham, 1983) was released that same year. David, played by Matthew Broderick, was a wild card. He didn’t mean to cause the world to go into a crisis. It was an accident. He thought he was just playing a game.

David, a high school computer prodigy, set out to hack into the server of a video game company to play games that had not yet been released. Instead, he accidentally hacked into a government computer system. He initiated a war simulation involving nuclear missiles.

The program was managed by artificial intelligence so advanced that it shut out all human attempts to end the simulation.  The computer wanted to be sure of “winning the game.” At the climax of the movie, David stood with the General in the War Room, helplessly facing the end of the world. With only moments before real missiles were detonated, David realized the solution. The answer began with a game of Tic Tac Toe.

“You can’t win that game!” The General bellowed at David.

The next step was to make the computer play itself at Tic Tac Toe.

What if the biggest game we play isn’t even “out there”? Isn’t even real? Is our biggest battle with our own psyche? Later in life, I began to ask and get answers to these questions. I found the culprit of my pain and trauma was not in the outside world. My traumas were caused not by bullies, but by my own reactions, my misperceptions, and my tendencies. Sum it up in one word: ego. When ego tries to win, both sides lose. Just like the computer discovered by playing itself in Tic Tac Toe, over and over and over.

The computer found the launch code in the midst of its frantic efforts to win the simple game. The missiles were engaged. The situation was tense. And then the computer figured out the game. There was no way to win. The same outcome occurred with the war game as Tic Tac Toe. The computer simulated war strategy after strategy. No winners. Not ever. When we attack, bully, or threaten, no one wins.

The children’s class finished another song, and it was the boys’ turn to play. I watched as an excited seven-year-old raced up to the board to place an O at the end of the row. The boys cheered. They had won! Now what? The singing teacher scrunched her eyebrows with a look of compassion toward Poppy. She hadn’t meant for the game to cause injuries.

Centuries of wars, between countries, between genders, between corporations, and even spouses, have shown us much of what we do not want. So, the question is, how do we win? Is it possible to avoid a loss if someone else wins?

Just the day before, in my Second Awakening Retreat, Angie Schultz, CSW shared a study that took place in the era of the “war” mindset in America. Researchers presented children with a game to play. It looked like a checkerboard with a game piece in the center. The object of the four sequential games was to take turns moving the game piece to either end of the board for a prize. Each turn consisted of either moving the game piece toward one’s personal goal or toward the opponent’s goal. The children were not coached to compete for the prizes, nor were they told they could cooperate to help each other win prizes.

The results of the study showed that the more Americanized and the older the child, the more likely they were to compete with their opponent. Far fewer of these seven to nine year olds got prizes. Often, both children ended by feeling frustrated, not seeing any way to win the game. Older children, especially the Americans, made around 18 out of 20 possible moves and went home with less than 1 out of 4 prizes on average. Competitive play usually resulted in no one getting a prize (Kagan & Madsen, 1971).

A significantly higher number of prizes were obtained by younger children, between ages four to five, and by children who were raised in Mexican culture rather than American. The younger children made only 5 out of 20 possible moves and went home with close to 4 out of 4 prizes (Kagan & Madsen, 1971). Imagine these kids looking at the researchers, wondering why the game was so easy, before walking home with a toy in each hand.

“Why can’t we have two winners?” I spoke into the tense room.

Light bulb. The singing teacher went back to her easel and flipped through the song book. “Well of course. The boys had three turns. The girls should also have three turns. It’s only fair.” She began leading a familiar tune as she scanned the room for girls with audible voices.

A girl with great singing effort was chosen. She knew exactly where to place the X. Poppy wiped her tears and looked around the room. Both the girls and the boys were happy.

Could it really be that simple? Could we alter the traditions, of not only Tic Tac Toe, but other paradigms where there is a winner and a loser? If we can have two winners in Tic Tac Toe, what could we create in court rooms? In child custody disputes? With international debates?

How have we lost the simplicity and cooperation of a little child? The answer is likely found in the ego.

I’ve been working on my ego structure for decades, as an ongoing process of resolving my own inner battle. I’m grateful for a life curriculum that ultimately led me to the secret, one that ends the war. That secret became the core element of my doctoral studies in resolving conflicts. I have included it in my training programs for couples in conflict, families losing hope, and individuals running around in destructive cycles. The Love Solve training incorporates this simple secret along with emotional intelligence. The secret to inner peace is quieting the ego-mind.

The bigger solution begins within each of us. Ego poses as our only opponent. “Egos can clash in any situation, but spirit cannot clash at all” (ACIM, 2007, p. 54).

The way to end all wars begins with ending your own.